So, today was just a day…July 6th to be exact. Woke up, thought, “ugh” sat down, my husband made me breakfast, then in order to kill just a little more time before driving to work, I put on eye-makeup. You’d a thought I murdered a puppy and wore its head as a hat. Sarcastic co-worker states, “why do you look so shiny”. Random firefighters, “what’s wrong with your face”. Decently nice co-worker, “So….what’s up with the eye makeup.”

Since regularly wearing any kind of makeup on this island takes a level of dedication I do not have (hell, let’s be honest, I didn’t have that much make-up dedication even when I didn’t live on an island) it makes quite the impact when I do. When I was a teenager my mother would wake me up early for school so that I would put makeup on. *blink* So my bleary-eyed, never get enough sleep teen-aged self would drag some liquid liner across my eyes (in a wobbly line I am sure), scrape some mascara on my lashes and hope to pass inspection. Yes, you guessed it; while other teenagers were rebelling by wearing excess makeup I rebelled by washing my face. So there!!! 🙂

Wanna know the worst part? I totally look way better with makeup than without. Stupid parents are always right. 🙂

Anyway, nothing too exciting happening today, but tonight when I came upstairs to listen to some music with headphones (sharing an apartment is WAY hard when you aren’t used to it) and work on some reports I found THIS in my bed! 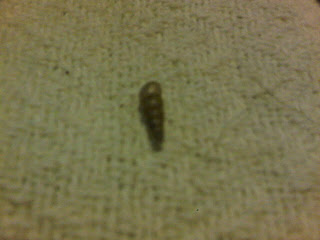 How is there a seashell in my bed? No idea–haven’t been to a beach in…well, a really really long time (yes, I live on an island…but I’m REALLY bad at getting out of my house).

I can’t see any of the animals bringing this tiny little seashell into my house. It is smaller than a nickel.
I found this mysterious. So I thought I would share. Yes, I am aware this story was a wee bit lame.
On the bright side of things, my cat is killing less these days. Well, he apparently licked a toad and his one pupil is WAY bigger than the other so that slowed him down a bit. Which is good because my bathroom was starting to look like a horror movie scene. Dead lizards, frogs, and an occasional “unidentifiable” made for tricky middle of the night pottying.
For those of you worrying about my cat’s health and well being, the first time he did this I freaked out, worried about a head injury, went to the vet…etc. etc. etc. Now (on Toad Licking; episode 6) I’m just pretty sure the little murderer is a stoner who likes to “taste purple” by licking cane toads.
I really think I have the coolest cat in the world; I sincerely hope he doesn’t kill me in my sleep.
Hope all is well with you!
Love,
-H.