>So, I know it's been a while. Honestly, I just haven't felt like writing much. I was almost to the point of blogging my internal monologue–which, lemme tell ya, not exciting. Do you really wanna know that today I skipped breakfast and then had to snarf a granola bar at around 10:30 to stop my stomach from growling? Or that last night my new neighbors brought me spaghetti and it made me wonder what it is about me that screams out, "unable to find food"?

I guess part of the reason I've been embracing this writers block is that I am hesitant to write about work on this blog. Recently, one of my favorite bloggists (2birds1blog.com) got fired due to hers. Damn shame, especially because I found her explanations of Boss #1 and Boss #2 hoo-larious.

But, things are a' hattenin. I am having HOUSEGUESTs. Two lovely ladies I have known for years (who have both been here before) are coming back. Let the debauchery/hoolarity/vacation begin!

Oops, not yet. 2 more days of work first.

Both fly in on Friday.

THEN the loud fun-ness of Not reading my email and Not looking at text messages and Singing (yes, we sing) and Joyful vacation shall commence.

So, turnaround is done (YAY!!) or at least my part is done. I’m not too sure everything is up and running as yet…but the industrial hygiene rented equipment has been returned and I am back to my rat race of normalcy. Important thing learned: you can not get as much done in 8 hours as you could in 12. Just saying. 🙂
So, I know it’s monday and usually on mondays I give you some medical lecture on random crap that you may or may not care about. But not tonight. Tonight I want to tell you about Priscilla. Priscilla is not a human, she is a spider, and in all honesty she may not be female (how the crap would I know, it’s not like I can lift a tail here). About a month ago I noticed a little spider with red legs and a big round whatever the butt side of a spider is called. I do not know why Priscilla intrigues me, maybe because she never leaves my bathroom shelf…not quite sure. But, Priscilla is growing…and the amount of dead insects below her web that is now attached to my crystal deodorant and facial exfoliant (both of which I do not use because I don’t want to disturb her) is INSANE. Now, I know I’m a little odd (or so my teachers said in elementary school) but here is the best part–I’m not alone in my oddness. One of my closest friends in the world sent me a text message a while ago that asked, “is it weird that I worry that the spider in my apartment may not have enough food?” At that time I had a colony of yellowish spiders living in my truck and I had to explain that I had the SAME concern.
As you should know by now I live in the rainforest and there is a plethora of beauty and nature and a hella lotta living critters my cat (Greebo) is doing his damnedest to destroy. In my never ending attempt to avoid cleaning up after my pets Greebo has been given free range in and out of the house by way of the bathroom window. This window had a screen which I removed. This has reduced my litter box duty to almost nothing (WIN!!) while allowing nature to infiltrate my bathroom (FAIL!!). There has been a number of tree frogs (which I carefully catch and remove), disturbingly large bugs (which I show the cat and then leave), and a bajillion lizards (which unless they are very tiny (aka cute) I let the Lizard Gods decide their fate).
Sadly, this is a posting that has no real climax. Nothing exciting has happened with the spider or any other fauna which has wandered in. In fact, my life continues to chug along per as normal. Sometimes I forget I live in paradise and then get shocked when I’m stopped by a heard of loose goats or horses or sheep. Sometimes there is a large group on young islanders riding horses down the median of the highway–bareback of course. Although the best ‘you ain’t in kansas anymore dorothy’ moment happened on Saturday. I was driving along and things got really slow. I (mostly) patiently waited my turn to pass the obstacle and as got right behind the obstacle I WISHED I had someone with me to take a picture. Sadly, I did not so let’s see if I can paint you a word picture: Picture a man, approximately 50 years old. Shirtless with SERIOUS muscles–but scrawny. Riding a bicycle with different sized tires and a wheelbarrow hitched backwards to the bicycle by some duct-taped impressive harness-y thing. Now, the “crowning” glory of this was that he was wearing a triangular straw hat with the top cut off and his impressive amount of dreadlocks fed through the top. There was so friggin much to see it was impossible to know where to look. It was truly awesome.
Sometimes I think I need one of those dashboard cameras the cops have. 🙂
Goodnight everyone!
-H 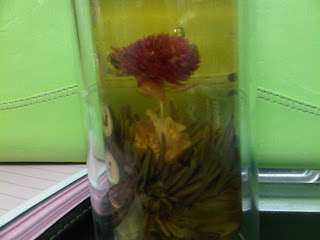 Many thanks to my friend Becky for giving me the best blooming tea present ever. I just watched this tea "bloom" while saying, "weeeeeeeeeeeee! And clapping my hands". Then I realized I was not 5 years old….then I said screw it and said, "weeeeeeeeee!" once again.
Find the joy in the little things people. 😀

Sent via BlackBerry by AT&T