Today has had a little too much monday in my monday. My pants are too tight due to, well, eating too damn much (damn, hold on…let me check my blood glucose….116. nope, that’s a pretty one. Sometimes when I am overly bloated it is due to too much sugar swimming around….sorry, back to inane ramblings of myself.) Where was I? Oh yes, bitching about tight pants. Not only that but the too tight pants are sending these thong underroos so far north I can feel them in my spleen. A thong? you ask…I can almost hear you all thinking, “da fuq?” while you read that, well the thong was lovingly picked out by the boyfriend….I was attempting to snag the most incredibly comfortable granny panties (Hanes Xtemp) but he was being all sexy-cute and (insert attention deficit disorder now).

O.M.G. – I have a story! Sorry to interrupt my woe is me whine but a while ago I was wearing some seriously old granny panties…at one time they were white with blue and pink hearts on them but had apparently survived a rough decade (hangs head in shame: okay, two decades) and along the way met bleach and possibly a garbage disposal…whatever, they were clean and it was too hot to be sexy or wear pants. So, while laying there sweating quietly next to the boyfriend he mentioned, “those be some ‘thexy panties sweetheart” and then lost. his. shit. laughing. I was almost offended and proceeded to jump on top of him (heat be damned! the non-appreciator must be tickle-murdered!) and that’s when I saw my profile in the mirror absolutely ROCKING that ‘thexy bleached out gaping loincloth look and realized that holy shit were my panties hilariously bad and much laughter was had by all. I also decided maybe it was time to cull some of the more historic examples of my undies.

Okay, back to my whining! Where was I…ah yes, pants too tight. underwear meeting spleen.. Oh, and I don’t often talk about work on this thing but whoo doggie, this building of doom also known to myself and a select few as “The Albatross” because it can never just be, the fuck, okay. Usually it is something small like floor tiles no longer remaining stuck to the floor or the internet going out (a lot) or the phones not working correctly (all the time) or….well, you get the idea. Sometimes? Sometimes it is something more impressive like the stairs attempting to fall the fuck off of the building. Today was slightly more impressive…today was the installation of a new water feature in the hallway! No wait, it was the pouring of the water from some faulty cooling equipment through the ceiling creating a giant dripping ceiling zip (which I so wanted to pop) but it popped itself and it was like Flashdance all up in the hallway. 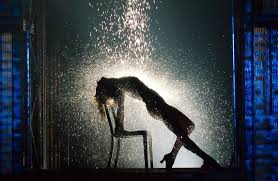 It was like this but with less of the sexy and no chairs were molested.

Well, kind of like Flashdance….but probably better acted and with less sexy and more office garbage cans being used to collect water. (Aside: I have a friend who did not see Flashdance until she was an adult and she seemed shocked at how horrible of a movie it was; I tried to explain to her that it was freaking magical as a 9-year-old but then I realized–holy shit. That movie is rated R. My parents totally didn’t regulate my viewing habits very well. Anyway, that shit was magical at age 9….that’s all I’m saying.) So, after the Flashdance ceiling zit explosion the mailman dropped off my new shoes! and it is the best day ever! They are orange and fabulous. 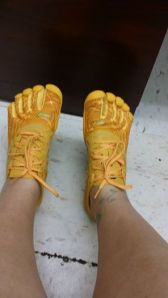 So, although there is every so much to be done work-wise it is remarkably challenging when there is a contingent of cooling workers spending the day in the hallway. So, while completely distracting it can be a little entertaining; the initial two dudes who showed up are not small – the one guy looks at the other guy and states, “we gonna have to call some of those little guys from the shop to fit up in ‘der.” the one dude decides to give it a go anyway and shimmies and wiggles his way above the ceiling to get to the unit only to find there was an access port to the unit in the ceiling of the first office. Although I feel like an ass about this one I’m still REALLY impressed that he managed to fit.

So, that’s about it. Enjoy the ramble!

So, one day at work I was trapped in an office with a farting Herbert attempting to complete am online training course and the smell combined with the horrid cartoon character named Bob attempting to teach me electrical code standards. FML it was a stinky hell.
But thankfully that prerequisite is completed and here I am in Jacksonville, FL taking the live face to face version. Yesterday I was totally hosed and someone else mistakenly completed my assigned project, I then basically threw crap together during his presentation to cover the gap. Not to toot my own horn but I did pretty darn good.
Something that happened earlier in the day sticks in my brain though; I was eating lunch with the instructor and some other classmates and the instructor said something which floored me, he said, “just wait until you get to your thirties, it gets worse.”
Huh?
My articulate reply, “huh? Dude, I’m 35.”
Too which he looked shocked.
To be fair, a sentence beginning with “huh” and “dude” did not reflect upon my supposed aged wisdom, but damn. I am now dying to ask people how old I look…Le sigh, vanity, not good.